No longer is going under the knife considered taboo as even many male celebrities now opt for plastic surgeries. Being a super athlete and Olympic gold medalist, Bruce Jenner plastic surgery has been much talked about.

William Bruce Jenner attained a heroic status in the USA after winning the Olympic Decathlon in 1976. Later on he has performed in TV series CHiPs as well as several made-for-TV movies. His most recent appearance is as a stepfather in Keeping up with the Kardashians. Outside TV appearances and being an athlete, Bruce has a successful auto racing career and owns a company Bruce Jenner Aviation.

Bruce’s face now appears to have tight skin, which is suggestive that he has gone for facelifts. His pointy and bony nose indicates a nose job. If we have a look at Bruce’s photos from the 1980s to 2014, there is a stark difference in his facial features. Pictures of Bruce Jenner’s Olympic triumph reveal a square jaw, rounded face, with a slender nose. No longer does Bruce possess those characteristics. 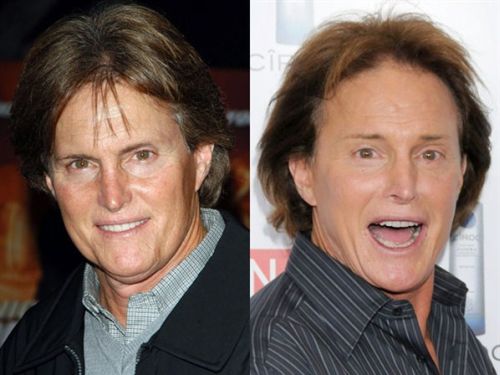 Bruce Jenner plastic surgery before and after

In 2009 in an interview with Access Hollywood, Bruce accepted about going for a nose job and partial face-lift in 1984. However the procedure botched and led to hurting Bruce’s self-esteem. In the show ‘Keeping up with Kardashians’, Bruce went on to say that his plastic surgery is amongst the worst of all times and that he has been compared to Michael Jackson for that matter.

In May 2009 on an episode of ‘Keeping Up with Kardashians’ Bruce went under the knife once again in order to correct the first-time botched surgery. He was initially happy with the results as per reports.

Plastic surgery seems to have taken a toll on Bruce’s skin. He was reported of having cancerous tissue on the side of his face in 2012. Later on in 2013, he was spotted with bandages on his nose. Bruce Jenner underwent surgery for skin cancer on his nose. This basal cell carcinoma tissue was removed, but has led to a scar on his nose.

Bruce has received criticism for excessive tweezing of his eyebrows. His brows have gotten smaller over the years. He also goes for manicures and has opted for growing his hair long right now. All these, hint of feminine traits. What was a landmark in establishing Bruce’s womanly appearance was his latest cosmetic surgery to smoothing out his Adam’s apple. The reason given by Bruce Jenner for going for a Laryngeal Shave is that he didn’t like his trachea.

Bruce Jenner se## change rumors have started surfacing after the Adam’s apple operation that Bruce has gone for. Laryngeal Shave is the first step towards gender reassignment. Bruce Jenner plastic surgery Adam’s apple before and after photos surfaced in February 2014. They display his clean and smooth neck. 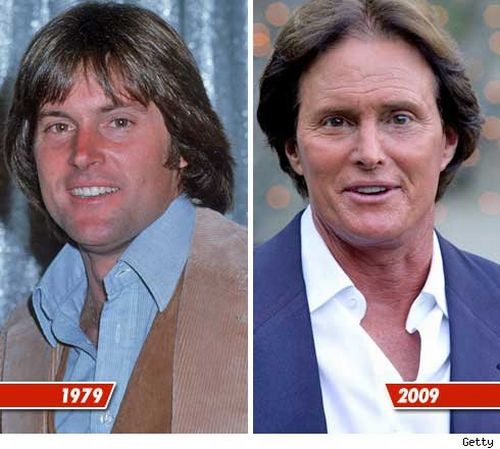 Bruce Jenner then and now

Bruce Jenner should have always been remembered as a record-breaking decathlete. A series of botched plastic surgeries seem to have taken a toll on his body. Some doctors even suggest that he has a body dysmorphic disorder which leads to him opting for excessive physical change. How much respect do you command for the super athlete? Does going under the knife dwindle the admiration for Bruce Jenner?