Cindy Crawford is an American supermodel and an international celebrity of the 90’s who became famous as one of the original supermodels during the late 80’s. She has been on the cover of nearly every fashion magazine in all over the world and was named as one of the top 100 hottest women of all time by Men’s Health Magazine.

She also ranked No 3 on VH1’s 40 hottest hotties of the 90’s. Her natural beauty and her trademark facial mole has earned her much more in addition to her $25 million fortune. Today she is the 48 year old mother of 2 kids and a perfect example of natural American beauty who stills occasionally lands on the cover of some of the most popular magazines.

After her retirement from modelling in 2000, Cindy has made a fortune by marketing rejuvenating creams and skincare products. She was considered a perfect example of natural beauty until her admission in 2006 about her long relationship with a highly skilled cosmetic surgeon. 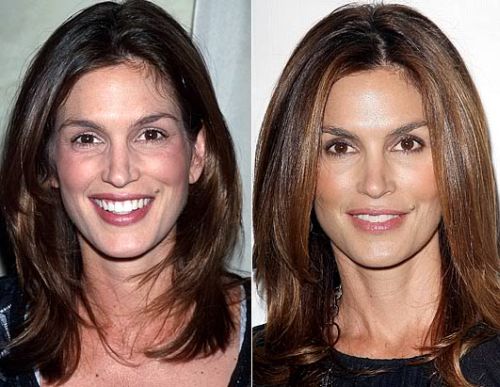 Cindy Crawford plastic surgery before and after

In an interview with the daily mail Cindy spoke of her regular cosmetic treatments with vitamins, botox and collagen injections. She had been using such plastic surgery treatments since the age of 29. Cosmetic surgeons and dermatologists claim that with age, cheekbones drop and most of the times they appear flatter and lower. But in contrast, Cindy has always had that high and fuller cheekbones with an entirely line free and smooth forehead.

Generally youthful faces have high and clearly defined cheekbones. The jawline is normally soft and defined. With the onset of age, the face appears more and more oblong as the cheekbones drop. Even the lip corners turn in to an inverted triangle that are characteristics of the ageing face. 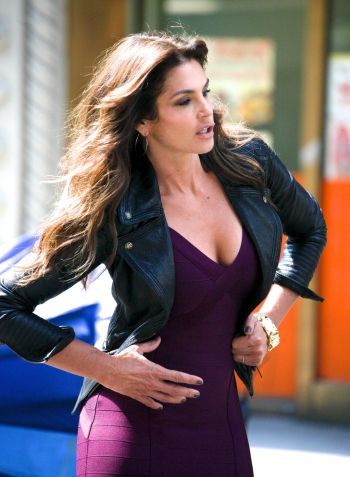 Recently cosmetic surgeons found out that instead of using the age old facelift method of pulling the skin back to reduce the wrinkles they could insert fillers to the cheekbone area. This would not only bring back the upper triangular lip but also create an allusion of youth. It has been suspected that such cosmetic procedures have been employed by Cindy Crawford to maintain her anti-ageing looks.

It has also been suggested that the absence of lines between her eyebrows and a clean smooth forehead could only be achieved with the help of botox. Cindy had also acknowledged during the interview with the Daily mail that that she uses botox and other vitamins to hide her ageing face.

Some dermatologists also suggest that she might be using Radiesse or Scluptra as these are among the most common among the celebrities. It is also hard to determine if she had any such cosmetic procedure as the injections like sculptra are done over a period of months and may last for more than year.

Every beautiful person has a so-called triangle of youth that is more commonly known as the triangle of beauty. It is an imaginary triangle created by tracing lines from one side of a cheek to the other cheek to the chin.

As one ages, the faces loses the triangle of youth and cosmetic surgeries and procedures like the Radiesse or Sculptra can help you gain the beauty back. Let’s not forget that Cindy also has her own skin care line that claim to be Cindy’s Anti-ageing secrets for common people.