Chintan Zalani The Oprah Winfrey Show has had an iconic history of revelations. Whilst legendary celebrities like Michael Jackson have admitted going under the knife on her show; Oprah Winfrey plastic surgery stories have also followed. Let us start by having a look at Oprah Winfrey’s career profile and then discuss if there are any evidences for her alleged cosmetic surgery.

Oprah Winfrey has been remarked amongst the ‘Most influential people of the world’ as well as ‘World’s most powerful woman’ on various occasions by numerous magazines including TIME and CNN. Winfrey has been known to possess the genius ability of getting common people and celebrities confess about their personal problems on her show.

The Wall Street Journal has even coined a term “Oprahfication” meaning public confession as a form of therapy. Her influential power of swaying public opinions and people’s purchasing choices has been named ‘The Oprah Effect.’ Besides hosting a talk show, Oprah has donned hats of an actress and producer. She is also known for her philanthropy. 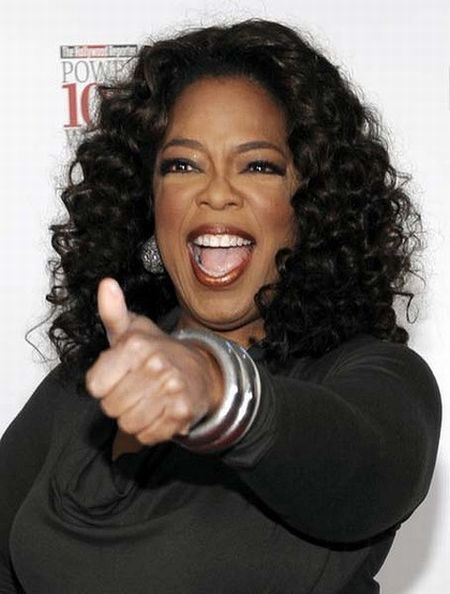 Oprah has interviewed the likes of Jenny Lee (addict who has had 59 plastic surgery operations) on her show. Many celebrities like Jennifer Aniston and Michael Jackson have also accepted going under the knife in their interviews with Oprah. The richest African-American of the 20th century has even persisted plastic surgery alternatives on her show. In 2004, Oprah praised a process called thread lift – a threaded needle is punched through skin to tighten it. Later on she advocated Thermage, which is use of radio waves to tighten skin.

Given the background, if Winfrey went for a plastic surgery, it would be taking a U-turn. After being accused of getting a plastic surgery by an American Tabloid, Globe, Oprah was very angry. As per the tabloid reports Oprah had gone for 7 hours of surgery encompassing liposuction, breast lift and a chin implant for looking younger and more relaxed. In 2003, Oprah rubbished these reports at the start of her 18th season. 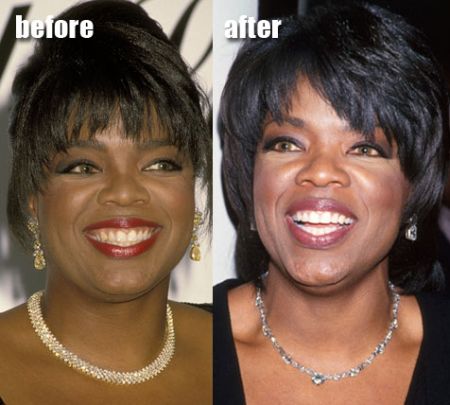 Oprah Winfrey nose job before and after

She said, “According to this I’ve had a breast lift and liposuction and a chin implant. Why would I want that? It’s not true. But, hey, I must be looking pretty good. I will be the first to tell you if I have plastic surgery.”

The aforementioned allegations have no evidence. But the most talked about feature from the start of Oprah’s career has been the appearance of her nose. ‘Oprah Winfrey Nose Job before and after photos’ reveal that she had an uneven and wide nose at the start of her career, whilst, now she has an even nose with the nostrils pulled down. The narrow bridge and more prominence to her nose can be attributed to Rhinoplasty. 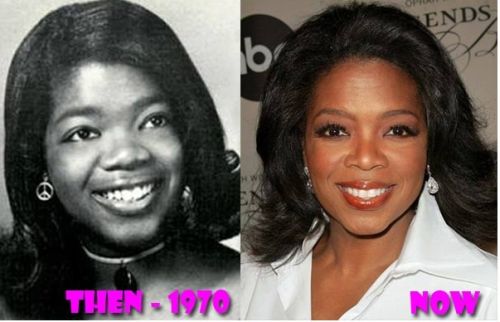 Oprah Winfrey then and now

People of Oprah Winfrey’s stature and intellect would probably not opt for surgical treatments. It will be very ironical to opt for such procedures when you advocate against the said procedures on your own show.

The change in Oprah Winfrey’s nose structure looks natural without drastic change. The makeup artists and lightning crew are probably doing a great job at highlighting the lady powerhouse’s best facial features. After having a look at Oprah Winfrey before and after plastic surgery photos do you think that she has opted for any surgeries?